Maglev train system in Nevada by 2010

The 10 year prolonged participation of the state of Nevada in the national competition sponsored by the U.S department of transportation has finally paid off. Nevada will get the honour of building the first ever high speed magnetic levitation (maglev) train in the western world with a speed of 300mph (483kph).  The department has issued $45 million as a guarantee to the state of Nevada to complete final environmental approvals and start construction.

The transportation department in the country has yet another project on cards- “DesertXpress”, a traditional high speed steel-wheel-on-rail, to counter the maglev; however the maglev project has an edge over the DesertXpress.

Currently operational in Shanghai- China, the maglev proves its superiority by maintaining an accuracy of 99.85 % on time and travels with a speed of more than 300mph (483kph). This speed is two times faster than the fastest Amtrak train. The magnetic levitation technology makes maglev environment friendly as compared to traditional ground and air transportation systems, also complying with all the state and local land use and environmental regulations.

This project will ease the congestion on the interstate highway no. 15 connecting Las Vegas to the people and business centers in Southern California. Cost wise the maglev is supposed to incur the same expenditure as traditional high speed steel –wheel-on-rail trains

The federal rail road administration has estimated $30 to $50 million per mile cost of traditional high speed trains. This indicates the DesertXpress’s total cost would go up to $9 billion for Las Vegas to Victorville route, which is far more ($4 billion) than what their website quotes. This puts maglev in the same price range and is much more superior in terms of speed and efficiency.

The most key factor is that, maglev intends to use a combination of both private capital and government funding. The proposed system between Anaheim, California, and Las Vegas will allow travelers to make the full 269-mile trip in a record 81 minutes. Construction on the first segment of the maglev train can begin in 2010. The president Dr. Barrack Obama wants to see the project completed entirely in his own country and not the rest of the world in bits and pieces. 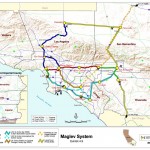 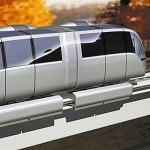