The Historical Journey of the Maglev Train

The biggest problem faced by the high speed rail system is friction causing the bearings to wear out by overheating. To overcome this problem several attempts have been made to levitate the train, so that there are no wheels and bearings to wear out. The only problem posed by the levitation method is that if the high speed train is in motion and the power fails. This is not that big issue anymore as there is technology available to counter this problem. In the early 20th century experiments were conducted using compressed air and high pressure water. This lasted till the 1920s’ and then disappeared but later returned in the 1960’s when the hovercraft and the linear motor were developed.

The maglev technology is a newest concept where the train runs on a magnetic field. The basic principles of this technology were known before the First World War and a working model was built by M. Emil Bachelet and was displayed in London just before the war began.

The magnetic field has to be alternating at a very high frequency in order to produce a consistent repulsive effect required to lift a train. M. Bachelet developed a maglev train, using a U shaped track above with a car below in which stabilizing brushes of shoes were used to run and keep the car aligned with magnets placed under the lower rail. The magnets on the track are switched on when the train passes and a high frequency oscillating current delivers the required magnetic field to lift the train.  A series of ring magnets were set up along the track with the line passing through the centre of each to run the train. The train moved forward as the magnetic rings would energize when the train entered each ring, just like a solenoid.

The model was successful but with a few technical problems such as the high cost of copper coils for tracks, the cost and difficulty to provide power to the track, the problems faced in maintaining a reliable magnetic field and the inefficiency of the solenoid drive.

With the technological development and the bright future of super conducting magnets and the linear motors the interest in maglev has come back. Super conducting magnets provide a much more powerful magnetic field for much less electrical power, making the maglev a bit economical. The linear motor is a simple concept with a regular electric motor comprising of a fixed ring of magnets (stator) with a central revolving set of magnets (rotor). The term linear motor is derived from the operation of the linear motor by laying the stator out as a long strip and putting the rotor magnets on the bottom of the vehicle to get linear operation.

The linear motor concept can be combined with oscillating magnetic field to provide both traction and lift. This idea was developed by Professor Eric Laithwaite (1921-1997). In 1956 he got the idea of a “linear motor to drive the shuttle on a weaving loom” patented.  Later he made the world’s first maglev train popularly known as the ‘Tracked Hovercraft’ with some funding from the government. It was called Tracked Hovercraft because the initial prototype used the blown-air hovercraft principle to lift it on the track.

The initial trials of the train looked good as it reached to top speeds of up to 100mph. But later in 1973 the government cancelled this project due to its high expenditure for less returns. The Britishers built a fully working commercial system, connecting Birmingham airport and a local station a few hundred yards away which operated for about ten years and was closed in the mid 1990s due to a shortage of spare parts. The maglev technology today is no longer a dream but an achievement. 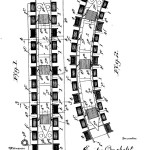 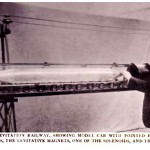