The latest version of the magnetically levitated Maglev train, which is the fastest vehicle on ground, is being tested by the Central Japan Railway. The Maglev train will cover the 514 km distance between Tokyo and Osaka in just 67 minutes, with a record speed of 581 kph – 935 km/h. The first section of the line to Nagoya is scheduled to be completed by 2025. Amtrak is very proud of its 150 mph – 241 km/h Acela Express, and so is California of its 220 mph – 354 km/h high speed rail project, if at all it ever happens. But Japan has decided to leave all the other projects in the world behind with their new maglev train connecting Tokyo, Osaka and Nagoya at a breath taking speed of 313 mph – 503 km/h. 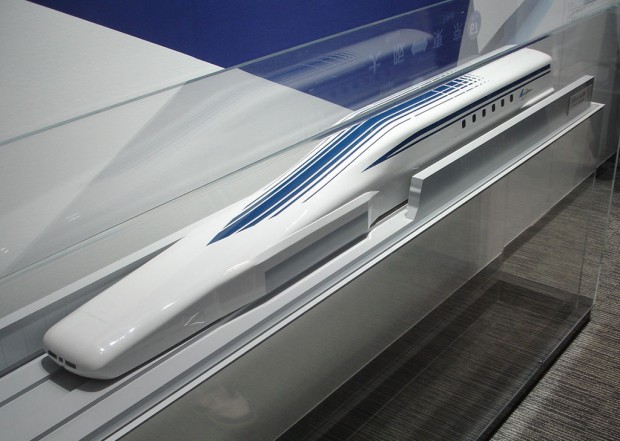 This maglev train project was in consideration since the last 40 years until recently, when it got its final approval to start construction in 2014. Majority of the tracks have already been laid, but there is a series of mountains that has to be blasted through. This means that the first section of the line connecting Tokyo and Nagoya will not be open for business until the year 2027, and Tokyo to Osaka will open in 2045. This 9 trillion yen ($ 112.44 billion) maglev project will cut down the travel time between Tokyo and Nagoya to about 40 minutes, and Tokyo to Osaka to 67 minutes. One of the main reasons the maglev trains are so fast is that they don’t have engines and wheels, and they float above tracks on a frictionless magnetic field. The train moves with help of magnetic waves sent down the track from one end to the other. The only resistance the train has to face is that of the air.

At present only China has a commercial passenger maglev route, which runs between Pudong International Airport and downtown Shanghai covering a distance of 19 miles. The total trip is of seven minutes out of which the train takes three minutes to accelerate to its top speed of 268 mph – 431 km/h, and another three minutes to slow down again, leaving only 30 seconds of the actual high speed travel. It is not that there are no high speed trains in Europe, China, Japan, and even Turkey, but the ones being developed in Japan are way faster than those. Although the maglev trains in Japan are not fully developed, they are steadily moving and being tested.

At present JR Tokai is running test maglev trains in Yamanashi. The test tracks which will eventually be a part of the line between Tokyo and Osaka are being extended from 18.4 km (11.4) miles to 42.8 km (26.6 miles). The line is practically straight, and will pass through deep underground tunnels for 60% of the time. The construction of the tunnels is one of the biggest reasons for the exorbitant cost of the project. JR Tokai is expecting to start an environmental assessment of the line running through Akaishi Mountains, northwest of Mount Fujiyama in December.