Two D class Chinese fast trains collided on evening of July 23, 2011 near the city of Wenzhou located southeast of Shanghai. Dozens of people were killed and several injured, leaving China’s prestigious new high speed rail (HSR) program severely damaged in an instant. Maglevs are better than traditional trains in a lot of ways, one of which is that it cannot derail. But this does not mean that maglevs are 100% safe. The fatal crash at the German test track in 2006 has proved that a human error can trip even with the best designed high speed transport system. The accident however proved that the German maglev did not derail even though it rammed into a 50 ton maintenance vehicle at 125 mph (200 kph). It is unrealistic to discourage the development of maglevs because of one train crash, especially when it carries less risk and higher benefits as compared to the traditional trains. 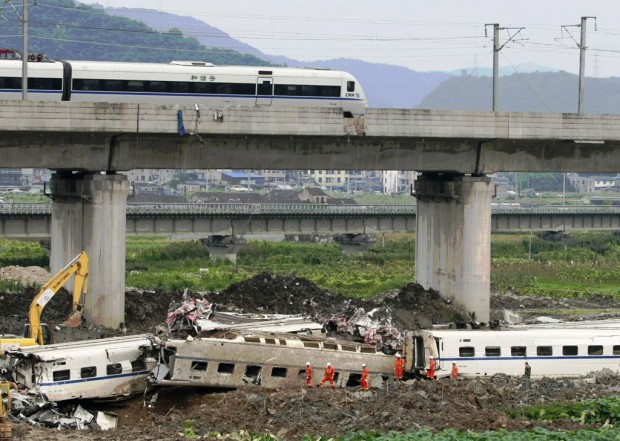 To implement safe and high speed ground transportation between cities there are a few priorities that must be adhered to right from the beginning.

The bitter truth about high speed ground transportation system is that the faster it is, the more it costs. Maintaining safety comes at a price that cannot be eliminated. Although it may seem desirable to build a system at the lowest possible capital cost, the officials should always keep in mind that there are no financial shortcuts for public safety. A majority of people in the US do not understand the pros and cons of high speed train systems. Therefore it is the responsibility of the government officials whom the people trust to make transportation policy decisions in the US considering the pros and cons of the system. Time has come for the US government to reconsider its current neutral position concerning high speed intercity ground transportation.

The accident in Germany clearly revealed that high speed trains can derail, whereas maglevs are designed not to. The accident in Lathen was not caused by mechanical failure, but by negligence of the operators; something that is often seen in other modes of transportation. A very few people realize that no human operator can react fast enough to brake at a speed of 150 to 350 mph. It’s usually too late by the time a problem is clearly identified. That’s why it is absolutely necessary that the high speed rail systems should be elevated and restricted to dedicated ways during operations, as done by the Chinese with their new HSR system. On the contrary the US DOT wants to run their high speed trains on the existing freight tracks, which according to the freight railroads, will limit the top speeds of the passenger trains to 90 mph, and will always pose a risk of possible collision with a freight train.

The collision of two trains on the same track in China means that their signaling and operating systems are not that precise and failsafe as they should have been. On the other hand a central computer controls the operations of maglev, simultaneously controlling all the vehicles on a particular line, and the maglevs in turn are continuously sending feedback to the central computer. This means that if one vehicle stops, the others stop as well, and do not start until the stopped vehicle is restarted or towed off. There are no drivers to cause mishaps by ignoring or misinterpreting signals.

China could have developed maglev instead of fast trains for the same cost, but their Railway Ministry stuck with the technology they knew better. However their overconfidence let to this mishap, since they had no experience with high speed trains. The Chinese railway Ministry did not appreciate the limits of high speed rail technology completely, and the Americans too are thinking on the same lines. Neither would we be hearing anymore about Chinese trains running at 250 mph, nor will their trains run faster than 220 mph. In fact their trains are likely to slow down to 165 mph as their systems begin to mature and the maintenance expenses start escalating.

On the contrary the 19 mile tracks of the Shanghai maglev have only been adjusted twice in over 8 years of operations. Even after making 115 daily trips up to speeds of 267 mph, the Shanghai maglev enjoys 100% safety record and near perfect on time performance. The maglev technology deserves more serious attention, and the first step towards its success would be to establish a new agency staffed by professionals who have thorough knowledge about this technology. Maglevs are not just trains, but are more like high speed electronic flights running on ground. Either we can own maglev and benefit from it by revolutionizing travel, creating industry, investing in its infrastructure and owning the jobs, or else we can simply give it up.